Overview of an Embedded System 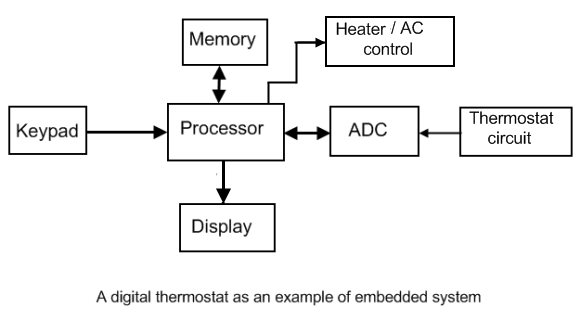 Computer systems are everywhere. They fall into essentially two separate categories. The first and most obvious is that of the desktop computer. This is the machine that first comes in our mind when we talk about computers. Desktop computers are designed to be flexible and to meet a wide range of user needs. The end users can change the functionality of a desktop computer by simply changing the application program. One moment you may be using it as a word processor, the next you as an mp3 player or a game station.

The second type of computer is the embedded computer (or embedded system), a computer that is embedded into a bigger electronics system and repeatedly carrying out a particular function, often going completely unrecognized by the system’s user. If you ask somebody how many computers he has got in his home, he would probably count his desktop computer and his laptop. However, computers have always been embedded into all sorts of everyday items. In fact, he may have over 20 computers, hidden or embedded inside washing machines, TVs, digital cameras, cell phones, ovens, air conditioners, DVD players, etc. Unlike desktop computers, an embedded computer is normally dedicated to a specific task.

Definition: An embedded system is a computer system that is built to control one or a few dedicated functions, and is not designed to be programmed by the end user in the same way that a desktop computer is.

A user can make choices concerning the functionality but cannot change the system functionality by adding or replacing software. For example, a programmable digital thermostat has an embedded system that has a dedicated function of monitoring and controlling the surrounding temperature. You may have choices for setting the desired low and high temperatures but you cannot just change its functionality as a temperature controller. The software for an embedded system is often referred to as firmware, and is contained in the system’s non-volatile memory.

In most cases, an embedded system is used to replace an application-specific electronics in the consumer products. By doing so, most of the system’s functionality is encapsulated in the firmware that runs the system, and it is possible to change and upgrade the system by changing the firmware, while keeping the hardware same. This reduces the cost of production even lower because many different systems can share the same hardware base and the functionality is determined by the firmware loaded into them.

The another advantage of using an embedded computer to replace a dedicated electronics circuit is the protection of intellectual property. If your design is completely hardware based, it is easier to steal the design. All you need is to identify the circuit components and trace the tracks on the circuit board. With an embedded system, the hardware can be identified but the software, which really supplies the system’s functionality, can be hidden and more difficult to crack.

Inside the embedded system

The embedded system also has memory, often several different types in one system. The memory is used to store the software that the processor will run. It also provides storage for data such as program variables, intermediate results, status information and any other data generated throughout the operation. The memory is an important part of any embedded system because it may dictate how the software is designed, written, and developed.

An embedded system communicates with the outside world through peripherals. The main types of peripherals that are used include:

Lets now discuss about the embedded system inside a digital thermostat. The functional block diagram is shown below.