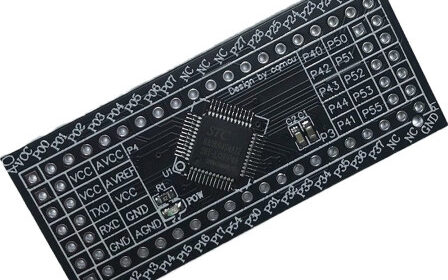 About STC8A8K64S4A12 Microcontroller and its Development Board This is the continuation of my first post on STC 8051 Microcontrollers here. Many Chinese microcontroller manufacturers develop awesome and cheap general-purpose MCUs using the popular 8051 architecture. There are many reasons for that but most importantly the 8051 architecture is a very common one that has been around for quite a long time. Secondly, manufacturing MCUs with 8051 DNA allows manufacturers to focus less on developing their own proprietary core and to give more effort in adding features. Holtek, Nuvoton, STC, etc are a few manufacturers to name.

8051 microcontrollers are the first-generation microcontrollers that sparked the modern embedded-system era and established the basic concepts for almost all microcontrollers. In the early 1980s, 8051 microcontrollers were first introduced by Intel. Later other manufacturers like Philips (NXP), Atmel (now Microchip), Silicon Labs, Maxim, etc took the 8051 architecture and introduced their variants of 8051s. Today there are hundreds of such companies which still manufactures this old school legendary micro. of them have even added more features like ADCs, communication peripherals like SPI and I2C, etc that were not originally incepted or integrated. There are even some manufacturers who produce