Another minimalist wrist watch, but with binary display

Earlier this week, we saw David Johnson-Davies’ minimalist ATtiny85 wrist watch that displays time using 12 LEDs arranged in a circle like a watch dial. I found another interesting LED-based wrist watch design shared by MACROFAB. It is a low cost watch based on Microchip PIC16F527 and it displays time in binary format. The PIC microcontroller runs in low-power crystal mode using a 32.768 KHz external crystal, that helps to achieve an accurate 1Hz signal required for timekeeping. The Macro_Watch has 11 LEDs. Four LEDs for the Hour (H1 – H4), Six LEDs for the Minute (M1 – M6), and a single Seconds LED for timing purposes. This guide will not go into how to read binary but a good guide can be found here. Pressing the switch on the front will lit up the LEDs for 10 seconds to allow reading of the time. Holding the switch for 3 seconds will allow setting the current time. The time advances with acceleration so the longer the button is pressed the faster the time will increase. There is no AM/PM indicator on the watch. The SEC LED can be repurposed for AM/PM use or the user can look outside and see if the sun is out.

Programmable relays are key elements in numerous automation applications such as automatic street light control, watering and pump control, HVAC, home automation, power plants automation in industries, etc. This article describes a DIY programmable relay switch using PIC16F1847 (PIC16F628A can also be used) microcontroller. It is a revised version of my previous PIC-based relay timer project with added features and some improvements in the circuit design part. Like my previous version, it also allows you to set both ON and OFF times. The maximum time interval that you can set for ON and OFF operations is 99 hours and 59 minutes. The new version features cyclic option, which means you can choose to run it in a continuous loop of ON and OFF cycles. The timer can be programmed through 4 push switches. The programming menu, relay status (ON or OFF), and number of cycles completed are displayed on a 16×2 character LCD. The timing resolution of this relay timer is 1 minute. The timer also saves the previously-set ON/OFF times and the cyclic option in its internal EEPROM so that it can retain these values after any power supply interrupt. The firmware for this project is provided for both PIC16F1847 and PIC16F628A microcontrollers. Here are the summary of the features that this programmable relay switch has:

END_OF_DOCUMENT_TOKEN_TO_BE_REPLACED 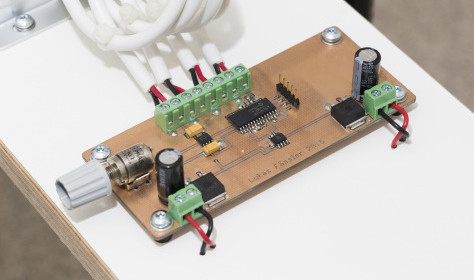 Lukas Fassler recently moved to a new apartment and he wanted to have a PWM LED light dimmer to control some of his 12V LED strips. When he didn’t find a ready-made one that would meet his requirements, he designed his own using the PIC16F1936 MCU. His PWM dimmer can handle 100W output power at 12V DC. At the center of my design is a 8-bit PIC microcontroller, a PIC16F1936. There’s not much special about this particular model, it’s just a type I’ve used several times before and still had some on stock.

A LM2931 provides the PIC with 5 volts from the 12 volts input voltage. I use the LM2931 as my standard 5V regulator. It’s pin compatible with the legendary 7805 but survives input voltages in the range of -50 to +60 volts making it very robust against transients.

This low power wireless gas meter monitor built at a budget of about 35EUR is battery-powered and uses a JeeNode MCU board along with an nRF24L01+ transmitter to send the gas consumption info to a remote Raspberry Pi.