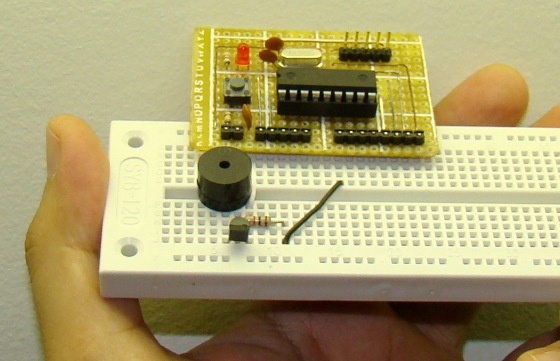 We have discussed in the past experiments how to use a PIC microcontroller to do a variety of things from flashing an LED to driving a motor, etc. Today, we will see how to play notes of a song with a PIC microcontroller. Musical notes are simply sound waves of particular frequencies. If the frequency of a note is known correctly, a microcontroller can be programmed to play the note by generating a square wave (of the same frequency) signal at one of its I/O pins. The signal must be fed to a speaker to listen to the sound. Here, we will discuss playing notes of the popular “Happy birthday to you” tune using a PIC16F628A microcontroller and a buzzer. In order to play the tune of a song, you need to know its musical notes. Each note is played for a certain duration and there is a certain time gap between two successive notes. The table below provides frequencies of musical notes starting from middle C. The middle C is designated as C4 because it is the fourth C key on a standard 88-key piano keyboard.

Musical notes and their frequencies starting from Middle C

The notes of the other octaves can be obtained by multiplying or dividing these frequencies by 2. For example, the next C note above the middle C would have a frequency of 524 Hz. You can find the frequencies of rest of the notes at the following link: http://cs.nyu.edu/courses/fall03/V22.0201-003/notes.htm

Musical notes can be generated using square waves of the note frequencies. So, in order to play the tune of a song with a microcontroller, all you need to know are the musical notes and their timing information; rest is all programming. A square wave can be generated at an I/O pin of PIC microcontroller by bit-banging the pin high and low. An alternative way of achieving this is using a hardware PWM module. Here, we will be using the former one.

The circuit diagram for this experiment is pretty simple. The RB0 pin of the PIC16F628A microcontroller is bit-banged to generate a square wave tone of desired frequency. An I/O pin of PIC16F628A can source current up to 25 mA, which may not be sufficient to drive an electric buzzer directly. Therefore, a BC547 NPN transistor is used as a current amplifier for the buzzer. An RC filtering may be used to improve the quality of audio (square waves are not pure waves and so they don’t sound as good as sine waves), but for simplicity, it is not implemented here. You can see I am using my PIC16F628A breadboard module in this experiment.

Generating audio tones is very easy in mikroC Pro for PIC compiler. It has a built-in Sound Library for serving this purpose. The library has following two functions:

The note frequencies of a song can be either defined as a variable array or saved as a constant array in ROM (if RAM size is not sufficient) of the microcontroller. The notes of the song “Happy birthday to you” are not too big and therefore, can be defined in an integer-type array in mikroC, as:

Similarly, the duration of each note frequency can also be defined in another integer-type array of the same size. The complete program (source + HEX files) can be downloaded from the following link.

Here’s a video showing the “Happy birthday to you” tune being played by the PIC16F628A microcontroller. You can tweak the time durations of notes little bit to sound it better.

Although bit-banging an I/O pin seems to be a very easy way of generating sound, the microcontroller might be substantially occupied while the tone is active. Read this article to find out alternative ways of producing sound with a microcontroller.