Posted on August 24, 2022 by Shawon Shahryiar Leave a comment 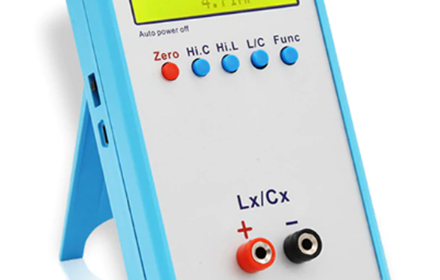 When designing or debugging an electrical or electronics device, it is very important to know the values of the components that have been used on board. With a multimeter most of the components can be easily measured and identified but most ordinary multimeters do not have options to measure inductors and capacitors as this is rarely needed. However, without capacitors there are literally no circuits while complex circuits may have inductors in them. A LCR (inductor-capacitor-resistor) measurement meter can be used to determine the aforementioned components but usually such meters are pretty expensive.

Here’s a detail description from Reviahh on a DIY version of the PICKit 3 programmer/debugger. It uses all SMT components and is portable in size. This schematic is very similar to the one Hendrik used, with a couple component changes and a fix for a PNP transistor that was shown backwards on his schematic. I’ll briefly talk about the different sections that I have labeled above. First – in the upper left corner is the pic24 processor that controls this device. It is a PIC24FJ256GB106 mcu. There are the requisite capacitors and 12MHz crystal attached, as well as a programming

LUKAS FÄSSLER designed a versatile programmable LED dimmer using PIC16F18325 MCU to drive white and RGB LEDs. It operates at a wide range of power supply (6 to 26 volts) and utilizes MOSFET drivers with non-inverting outputs. The mosfet drivers are basically the same as before but now with non-inverting outputs: LM5111-1M. There are two of them for a total of 4 outputs compared to only 3 with the previous version. They now drive much (physically) smaller but no less capable mosfets which allowed me to significantly downsize the whole board to 75x65mm.  The NXP BUK9Y12-40E are rated at 40

This design application note from Microchip illustrates the the implementation of a Bluetooth-connected weight scale using Microchip’s PIC16F1783 MCU and the RN42 Bluetooth module. It is powered by 2 AAA batteries and the measured weight is displayed and recorded on a smartphone or tablet. Weight scales have been used for quite a while in homes, businesses and medical facilities. With the increase in demand for health-related information, connected weight scales can now send data to smartphones, tablets and the Cloud where it can be utilized by medical providers and other care givers. Connected weight scales are being used with other home-based