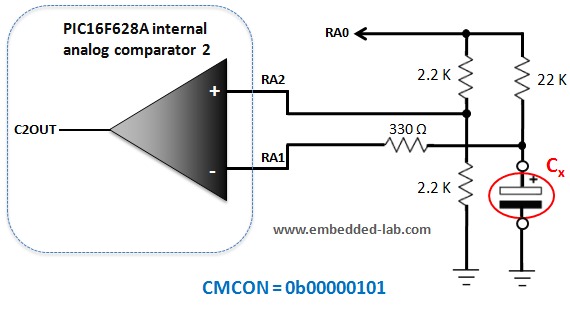 Capacitors are one of the most common passive electrical components that are extensively used in all kinds of electronic circuits. In this project, we will discuss a technique of building a digital capacitance meter using a PIC microcontroller. This project can measure capacitance values from 1 nF to 99 ?F, with a resolution of 1 nF. The technique is based on measuring the time elapsed when a capacitor is charged to a known voltage through a series resistor. The microcontroller used in this project is PIC16F628A. By knowing the value of the charging resistor (in this case it is 22K) and the charging time (from Timer2), we can now solve the capacitor equation, mentioned above, to compute C. Here’s the mathematics involved in the process. For simplicity, the Timer2 is initialized with value 104 so that it overflows in 256-104=152 clock cycles (the number 152 comes from the math shown below). If we use 4.0 MHz external clock source, this is equivalent to 152 ?sec. By doing so, the calculations are much simplified as described below. The final equation suggests that for the given arrangement, the measured capacitance (in nF) is simply 10 multiplied by the number of times the Timer2 overflows, starting from 104 every time. This gives a resolution of 10nF, which can be further improved to 1nF by considering the value of Timer2 itself at the instant when the comparator output switches to low and the Timer2 module is stopped. The complete circuit setup for this project is given below. The pins RA0-RA2 goes to the voltage divider and capacitor charging circuit described earlier. The measurement begins when the Start push button is pressed. The measured capacitance is displayed on a standard character LCD. The +5V power supply is derived from a 9V battery using a LM7805 regulator IC. I am using my DIY Experimenter’s I/O board for the LCD part of this project, and my 18-pin PIC16F board for easy prototyping with the PIC16F628A microcontroller. Complete setup of the experiment

The firmware for the PIC16F628A microcontroller is written in C and compiled with mikroC Pro for PIC compiler. The maximum value of measurable capacitance is set to 99.99 uF. The program displays “Out of Range” message while measuring capacitance value higher than this. Normally, the RA0 pin is set to low so that the capacitor gets discharged through the 22K resistor before measurement. When the Start button is pressed, the RA1 pin is set to low for 2 sec which expedites the discharging process as the capacitor discharges much quicker through the 330 ? resistor, as compared to 22K. Next, the Timer2 is initialized and the corresponding interrupt is enabled. RA1 and RA2 are configured as analog comparator inputs. Then RA0 is set to high and Timer2 is turned on. As soon as the comparator output (CMCON.C2OUT) flips from high to low, the Timer2 module is stopped. The time required by the capacitor to charge from 0V to half of the voltage across the RC circuit is computed from the number of times the Timer2 has overflown and the final value of the Timer2 register itself. This timing information is used to estimate the capacitance value using the math described in the theory section.

A variety of capacitance values are tested with this capacitance meter and the results are found pretty consistent with their rated values. Here are some snapshots showing the meter in action. The charging phenomenon of a capacitor through a series resistor was discussed and used to construct a very basic capacitance meter. The PIC16F628A microcontroller was used to control the charging/discharging process of the capacitor. With the help of a built-in analog comparator and a timer module, the PIC microcontroller computed the time required by the capacitor to build a known voltage across it when charged through a given series resistance. Using all these information, the microcontroller computed the capacitance. The measured output was found to be reasonably consistent with the rated value when tested with a wide range of capacitance values.

Note: All capacitors, but specifically high voltage capacitors, must be first properly discharged prior to measurement to avoid any damage to the capacitance meter circuit.