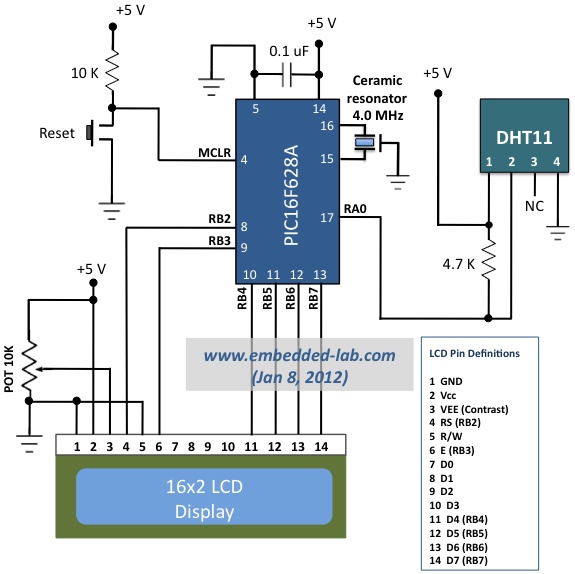 The DHT11 sensor comes in a single row 4-pin package and operates from 3.5 to 5.5V power supply. It can measure temperature from 0-50 °C with an accuracy of ±2°C and relative humidity ranging from 20-95% with an accuracy of  ±5%. The sensor provides fully calibrated digital outputs for the two measurements. It has got its own proprietary 1-wire protocol, and therefore, the communication between the sensor and a microcontroller is not possible through a direct interface with any of its peripherals. The protocol must be implemented in the firmware of the MCU with precise timing required by the sensor. The following timing diagrams describe the data transfer protocol between a MCU and the DHT11 sensor. The MCU initiates data transmission by issuing a “Start” signal. The MCU pin must be configured as output for this purpose. The MCU first pulls the data line low for at least 18 ms and then pulls it high for next 20-40 ?s before it releases it. Next, the sensor responds to the MCU “Start”  signal by pulling the line low for 80 ?s followed by a logic high signal that also lasts for 80 ?s. Remember that the MCU pin must be configured to input after finishing the “Start” signal. Once detecting the response signal from the sensor, the MCU should be ready to receive data from the sensor. The sensor then sends 40 bits (5 bytes) of data continuously in the data line. Note that while transmitting bytes, the sensor sends the most significant bit first.

The 40-bit data from the sensor has the following structure.

For DHT11 sensor, the decimal bytes of temperature and humidity measurements are always zero. Therefore, the first and third bytes of received data actually give the numeric values of the measured relative humidity (%) and temperature (°C). The last byte is the checksum byte which is used to make sure that the data transfer has happened without any error. If all the five bytes are transferred successfully then the checksum byte must be equal to the last 8 bits of the sum of the first four bytes, i.e.,

Now lets talk about the most important thing, which is signalling for transmitting “0” and “1”. In order to send a bit of data, the sensor first pulls the line low for 50 ?s. Then it raises the line to high for 26-28 ?s if it has to send “0”, or for 70 ?s if the bit to be transmitted is “1”. So it is the width of the positive pulse that carries information about 1 and 0.

At the end of the last transmitted bit, the sensor pulls the data line low for 50 ?s and then releases it. The DHT11 sensor requires an external pull-up resistor to be connected between its Vcc and the data line so that under idle condition, the data line is always pulled high. After finishing the data transmission and releasing the data line, the DHT11 sensor goes to the low-power consumption mode until a new “Start” signal arrives from the MCU.

Here is the circuit diagram showing the DHT11 sensor and a HD44780-based character LCD interfaced to the PIC16F628A microcontroller. The microcontroller runs at 4.0 MHz clock using an external resonator connected between OSC1 (16) and OSC2 (15) pins. The use of 4.0 MHz clock makes the timing calculation easier as 1 machine cycle becomes 1 ?s. The timing information will be used to calculate the width of the received data pulse from the sensor so that we could identify if it is carrying a 1 or 0. The following pictures show the circuit setup on a breadboard. Don’t get confused with the four LEDs and tact switches shown on the perforated board. They have nothing to do with this project. They are there because I am using my DIY Experimenter’s I/O board for the LCD part of this project. Similarly, I am using my 18-pin PIC16F board for easy prototyping with the PIC16F628A microcontroller. Complete setup of the circuit PIC16F628A module and the DHT11 sensor are plugged into the breadboard

Writing a software for DHT11 sensor is little more challenging than the hardware part because of the timing conditions for 1s and 0s. I have written sub-routines in mikroC Pro for PIC for initializing the DHT11 sensor and reading the 40-bit of data in sequence. I have used Timer2 module to keep track of the width of the received data pulse, which is required to identify if the received bit is 1 or 0. When a low-to-high pulse is detected at the beginning of any data bit, TMR2 is cleared and turned ON. Since the clock frequency used here is 4.0 MHz, the TMR2 increments by 1 in every 1 ?s. The TMR2 is stopped whenever the data pulse is low again. The value of the TMR2 register gives you the the width of the data pulse in ?s. I am using 40 ?s as the threshold for identifying 0 and 1. If the TMR2 is greater than 40, it means the received bit is 1, else it is 0. Here is the complete source code written in mikroC Pro for PIC. It can be easily adapted to any other platform, but remember that if you are using a different clock frequency you should have to modify the timer operation accordingly.

The accuracy of DHT11 is not as good as Sensirion’s SHT1X/7X series sensors, but it provides an easy and cheap solution to hobbyists for measuring relative humidity and temperature in parallel using a single device, which is sometime required in certain applications such as calculating the dew point.