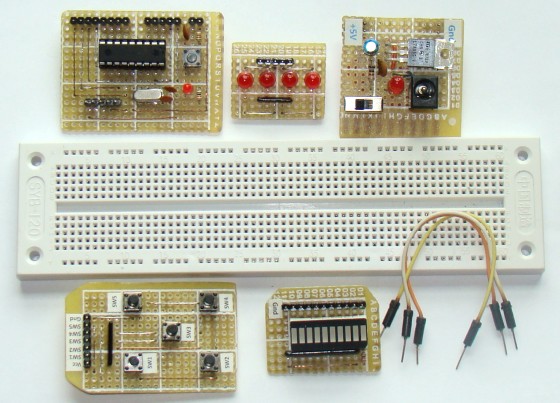 Breadboards are a great tool for prototyping and testing electronics circuits. Here I am sharing with you some plug-in modules that I once made to make my breadboarding life easier. I have used these modules many times in the PIC experiments described in this blog. These modules  serve very common functions that are required in most microcontroller circuits. Their use not only reduces the number of wire connections on breadboard, but also expedites prototyping and makes debugging of the circuit easier. I got inspired to make these modules after getting tired of putting together the same basic microcontroller setup, tact switches and LEDs on breadboard again and again for testing every new project. If you are in a similar situation you may consider building these modules.

This module carries a 18-pin PIC microcontroller (PIC16F628A, PIC16F88, PIC16F1827, etc). The power supply pins and the I/O ports of the microcontroller are accessible through male headers that can be easily plugged into a breadboard for rapid prototyping. The headers are arranged in such a way that all I/O pins of a port are available together in a row. This reduces the time to find a specific port pin. This module frees up a lot of space on the breadboard since the oscillator, reset, and ICSP connections are already on board. More details on this module is described HERE. Microcontrollers and peripheral devices require electric power to operate. This module provides a regulated +5 V power supply for your circuit on the breadboard. The +5 V and Ground terminals are accessible through male headers that easily go into the breadboard. The module uses the popular LM7805 voltage regulator IC. More details can be found HERE. These are accessory modules that are frequently used in microcontroller circuits. LEDs are useful for checking the logic status of the output port, whereas tact switches can provide digital inputs. Sometimes, you may need to interface your project with a PC. Serial port communication is a good choice for doing that as it is easy to implement. However, you need a voltage translator to interface the TTL outputs from your microcontroller with a RS232 port of your PC. MAX232 IC serves this purpose very well with a few external capacitors for the internal charge pumps. The circuit diagram of these modules are pretty standard and I didn’t feel it necessary to provide here. Seven segment LEDs are primarily used to display decimal numbers but they can also display a few alphabets and other characters. This module contains a 4-digit common cathode seven segment LED display, four NPN transistors for digit selection, and eight current limiting resistors for LED segments (a, b, c, d, e, f, g, DP). This module provides access to its LED segments and digit select pins through female headers. However, they can be replaced with male headers to make it plug-gable into the breadboard. The module uses a standard four digit multiplexed seven segment display circuit. Constructing these little modules is a one-time hard work, and prototyping becomes lot easier after that. The picture below shows a very simple temperature bargraph project setup on a breadboard using these modules. The PIC16F1827 microcontroller reads the analog output from a LM34DZ sensor, and displays the temperature on a 10-segment LED bargraph. The LED segments of the bargraph display are driven by RB0-RB7 and RA1-RA2 port pins, whereas the temperature sensor output is connected to RA0/AN0 ADC channel.The LED bargraph is labeled to display temperature ranging from 68-86 °F in a step of 2 °F. Seven jumper wires are sufficient to connect the modules together and complete this circuit on a breadboard. Bottom side view of the boards (Click to enlarge)